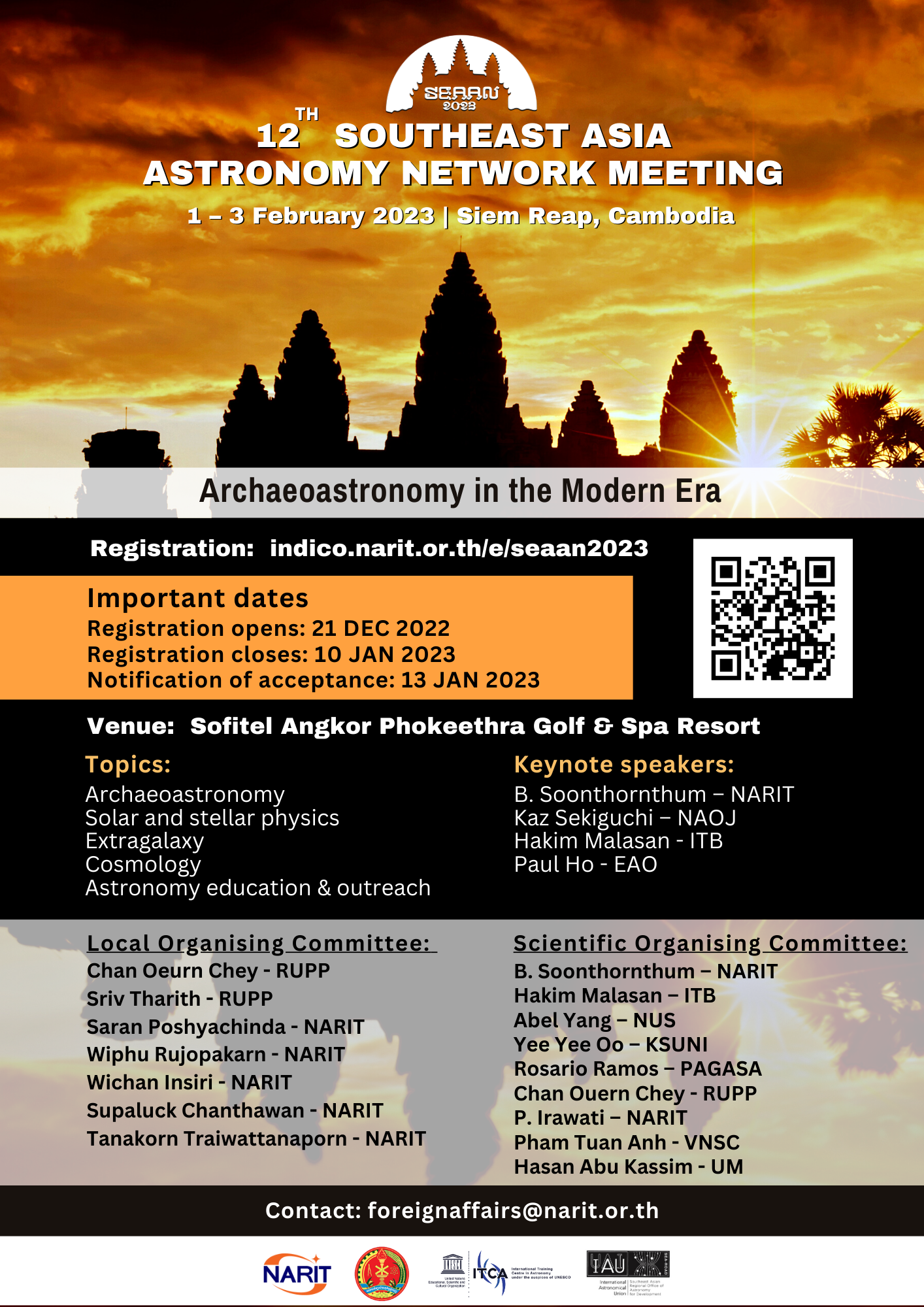 One of the key success factors for the achievement and a leap growth in Astronomy is a strong collaboration and synergy among the member countries in the region to promote and develop an effective research platform for researchers and students. The Southeast Asia Astronomy Network (SEAAN) has been established since 2007 to nurture astronomy and establish an effective mechanism for promoting the development and experiences in astronomy research and education among Southeast Asian Countries.

SEAAN was first established in 2007 during the Thai National Astronomy Meeting in 2007, and the first meeting was hosted by the National Astronomical Research of Thailand (NARIT). Since then, SEAAN Meeting has rotated among SEA countries. Recent meetings were held in Singapore 2019, Bandar Lampung, (Indonesia 2018), and Mandalay (Myanmar 2017). This 12th edition in Siem Reap, co-hosted by RUPP will be the first SEAAN Meeting since the COVID-19 pandemic era (2020-2022).

SEAAN has also been endorsed by ASEAN Committee on Science and Technology (ASEAN COST) to partner and with Subcommittee on Space Applications (SCOSA) since 2015, enabling it to work closely with space agencies in SEA in promoting astronomy and space education programmes in the region.

The purpose of SEAAN Meeting is to bring together people working in the fields of astronomy and astrophysics from SEA, aiming to facilitate exchanges in both research work and educational practices, as well as astronomy outreach activities. The 12th SEAAN Meeting will focus on Archaeoastronomy in the SEA region, consisting of plenary talks, oral and poster presentations for the course of 3 days.

Furthermore, a satellite field study project in Archaeoastronomy “Wisdom of Astronomy in Lanna Cultures and Its Related Kingdoms: Temple Orientation, Traditions, and Star” will be conducted in conjunction with the 12th SEAAN Meeting, giving the opportunity for Thai researchers to work and collect data needed for the project. The project and other research work in Archaeoastronomy from other SEA countries will highlight the theme of this 12th SEAAN Meeting.